Activities in our area

Travel through the enchanting nature of the Ore Mountains at your own pace - that's pure happiness! Our hotel is ideally located for hikers and cyclists, as the old name "Kreuztanne" already betrays: we are in the middle of a crossing of various hiking and cycling routes in the middle of nature! 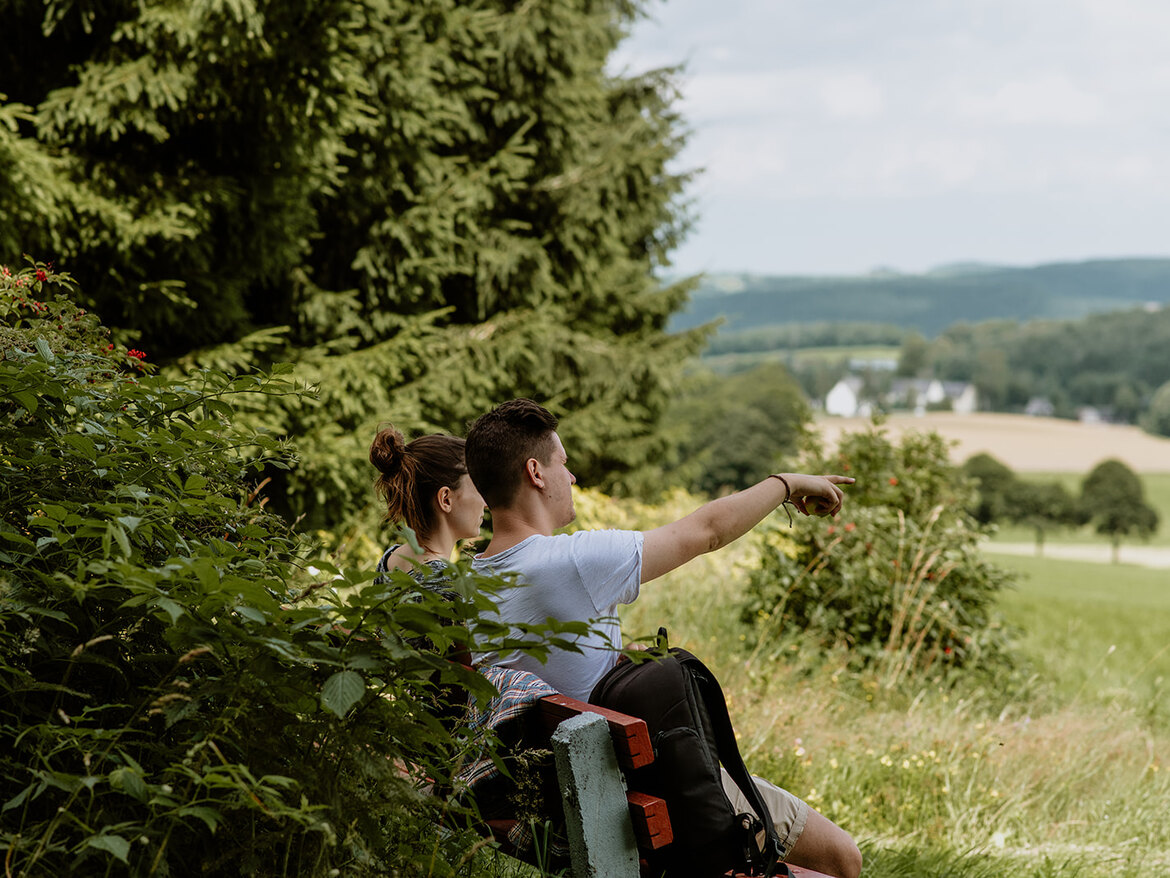 Hiking trails in the area

The Waldhotel Kreuztanne is located at a crossroads of the old post roads and their historical access roads to the surrounding villages. Starting point and destination for all walks is the Waldhotel Kreuztanne, located 700 m above sea level. You can combine 4 circular walks in a star shape. The path along the old post road from Sayda leads you along the König Friedrich August Höhe (736 m - also called Friedebacher Höhe) and is marked on every hiking map as a viewpoint. 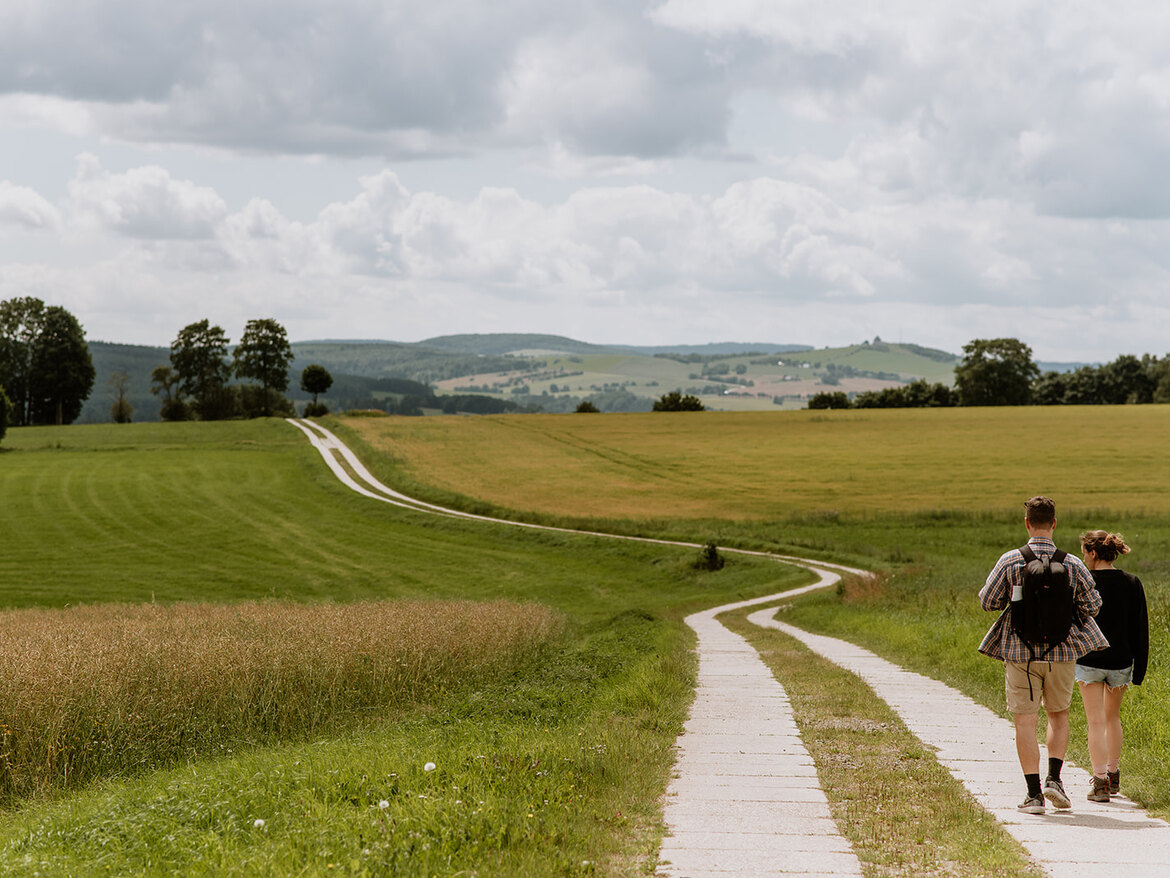 We are located directly on the Kammweg on stage 2 coming from Holzhau towards Seiffen. Stop in the Waldhotel Kreuztanne and give those tired legs a rest. After a cold beer, a good meal, relaxation in the sauna and a wonderfully restful night, you will be reborn the next day and fit for the further kilometers on foot.

BLOCKLINE - the mountain bike adventure of the Ore Mountains

On a total of 140 kilometers, the great feeling of endless freedom awaits the bikers: Three exciting rounds lure adventurers from young to old on an expedition in the beautiful, untouched nature of the Eastern Ore Mountains. Breathtaking wooden signs show the way of the BLOCKLINE. In short stages, the tour leads through constantly changing landscapes - impressive panoramas, narrow valleys, deep forests and lots of water make it a real highlight. 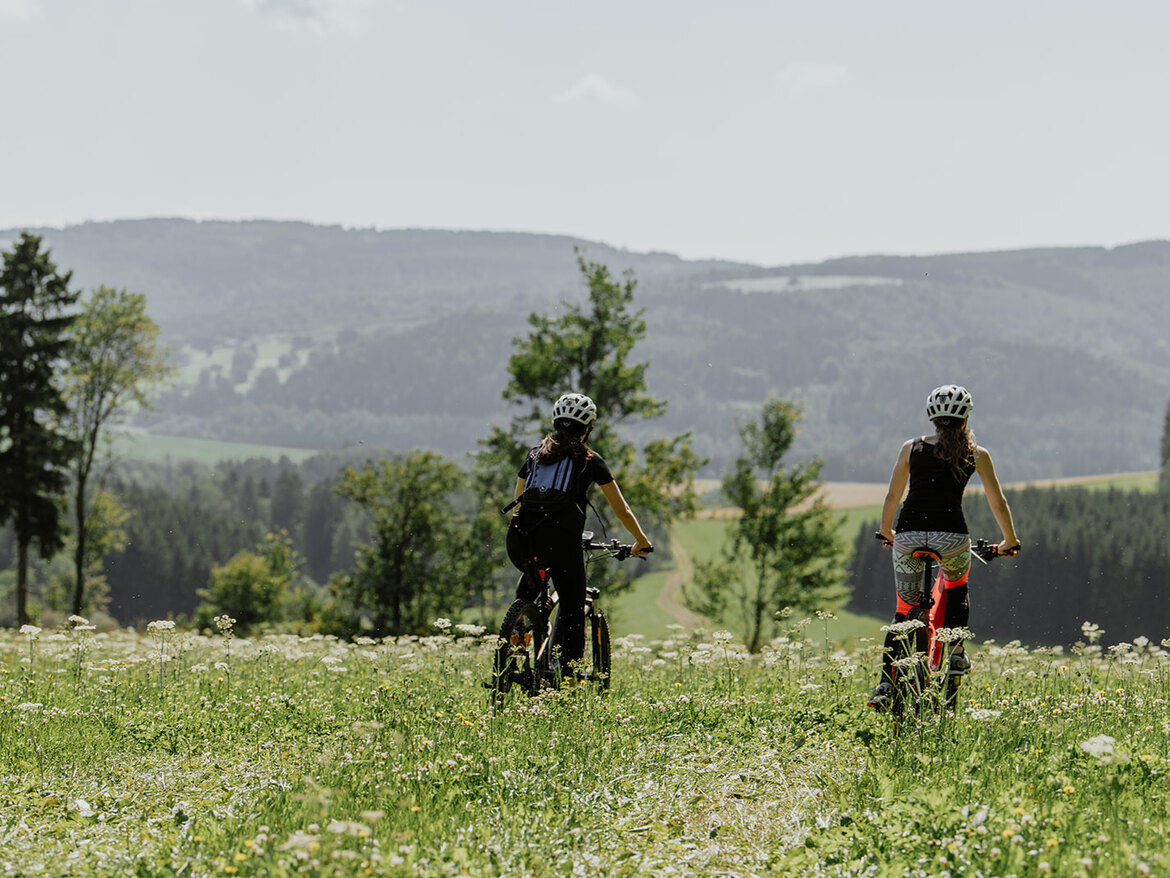 The BIKEMAN is back! What started in 2000 as an extreme mountain bike tour from Klingenthal to Altenberg over 180 km in one day, now finds its continuation in the new BIKEMAN Trail Ore Mountains. A large loop of approx. 155 km with the most beautiful trails in the middle of the Ore Mountains. The route offers fantastic views, enchanting nature, dreamy places and a varied course. 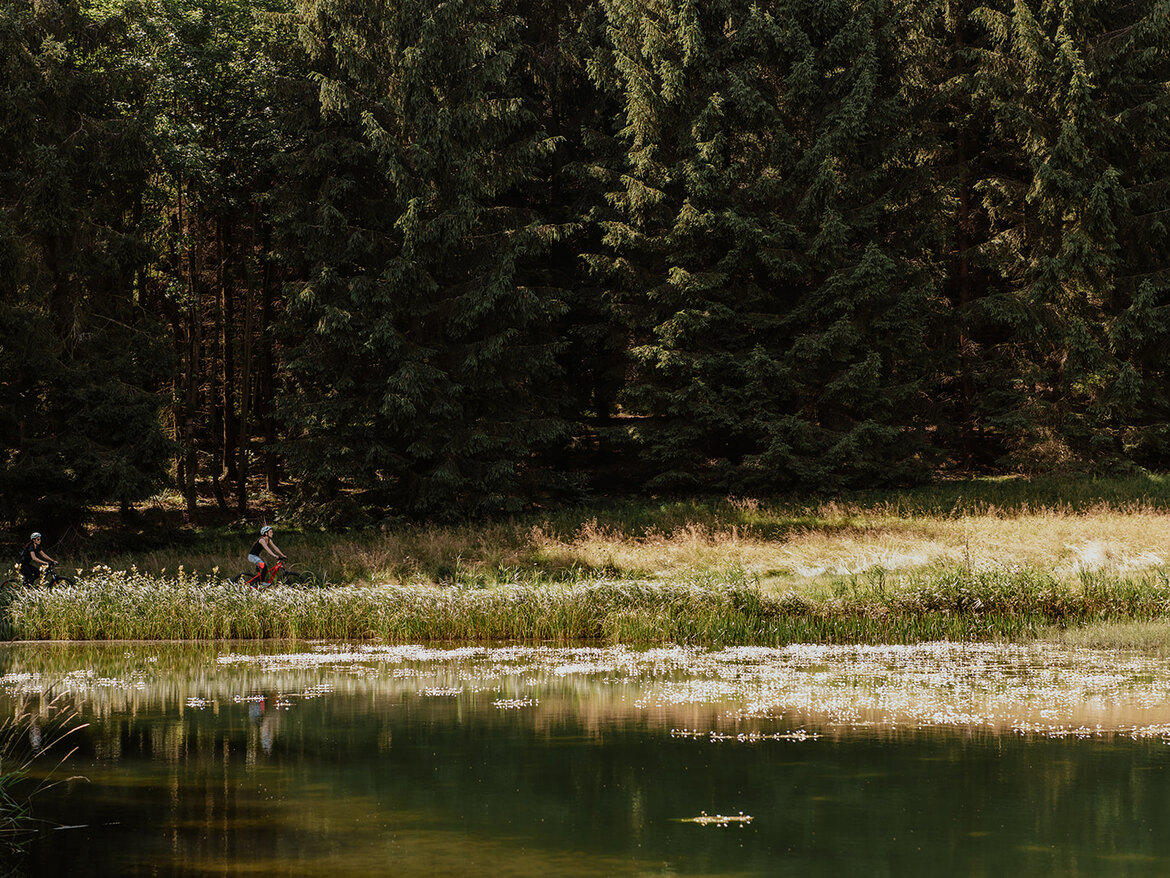 Exploring the Ore Mountains by bike - Olbernhau and region

The town of Olbernhau offers numerous suggestions for bicycle tours. The annual Olbernhau Cycle Tour has offered very scenic tours for more than 20 years. Some of these tours are signposted, so it is possible to cycle without a map. Just follow the small signs on the green, red and yellow tours. 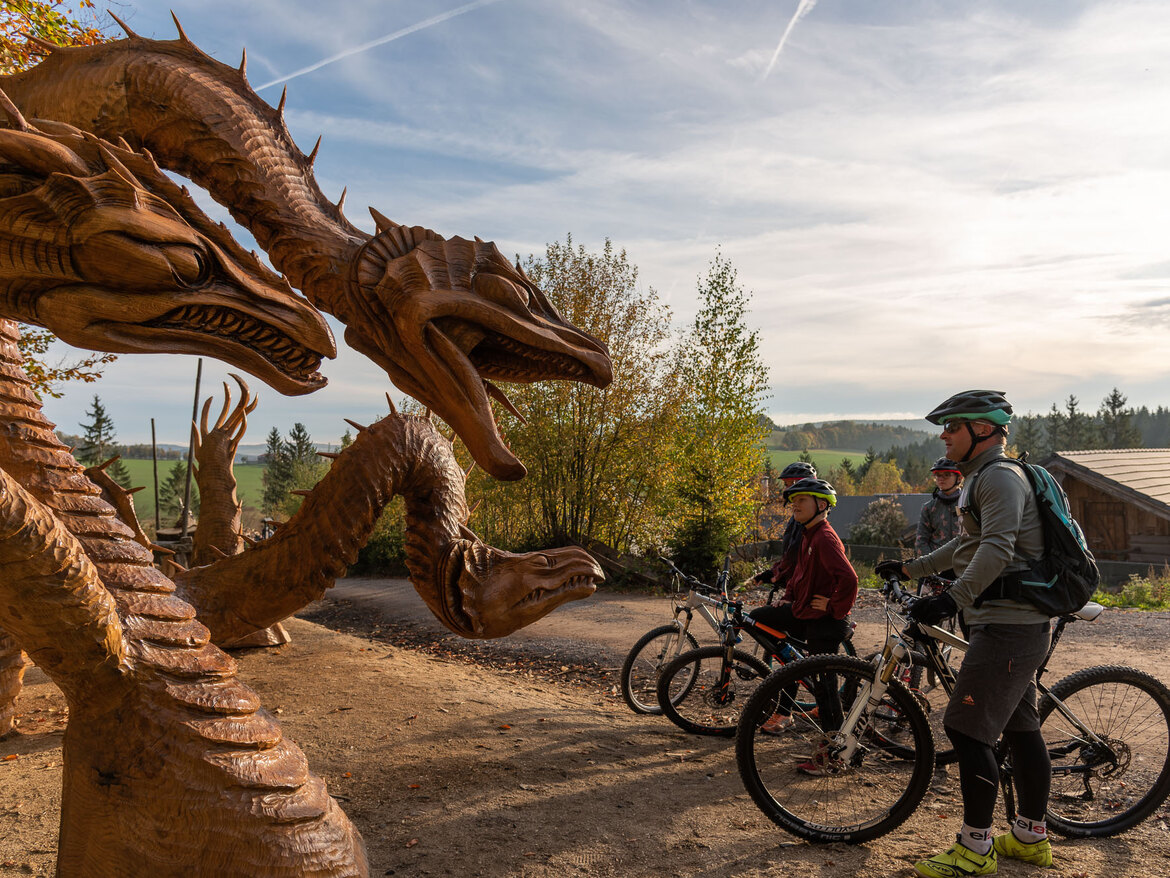 The forest experience center with its founder Andreas Martin, also called the 'sauensäger', is always worth a visit! The center hosts the annual Huskycup, an international competition for chainsaws. The resulting figures and themed worlds, the longest table in the world, a large adventure playground and much more can be discovered in Blockhausen. More info Blockhausen.de 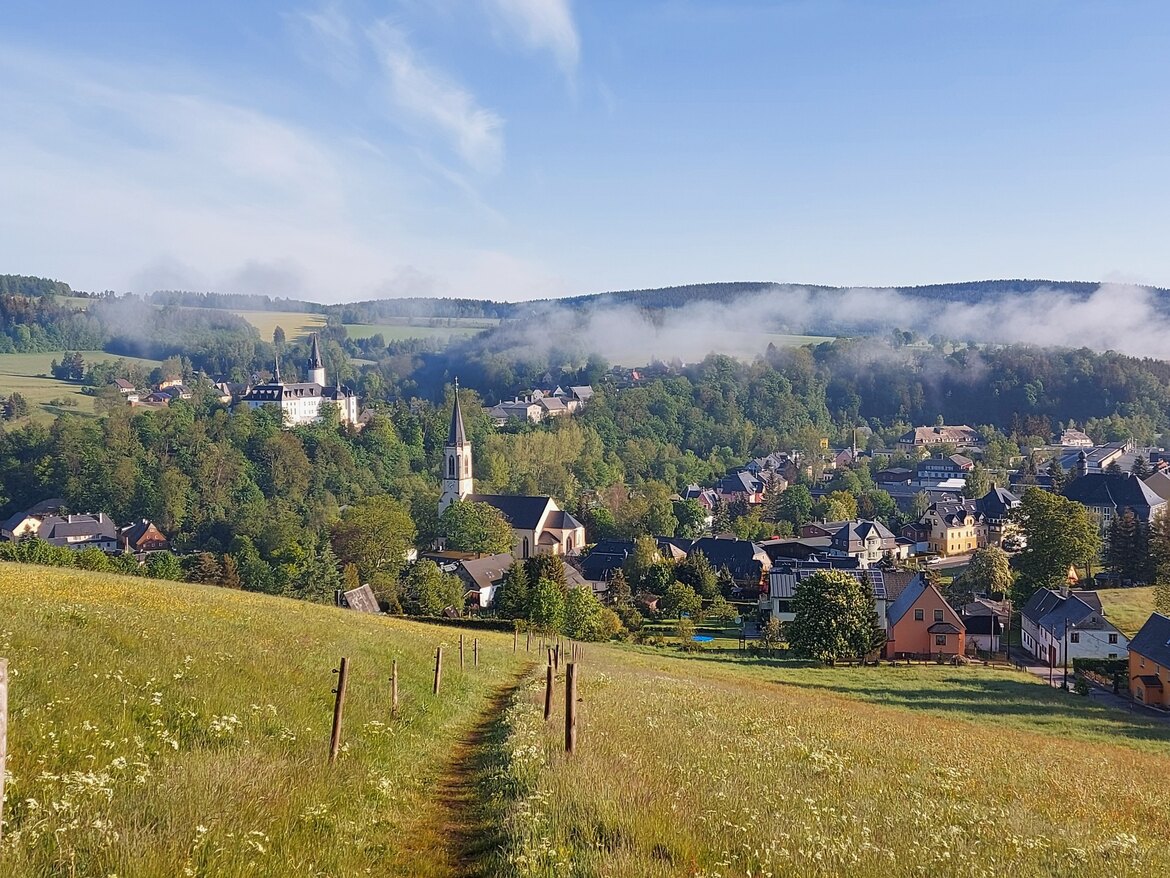 A very different kind of experience is a visit to the "Erzgebirgisches Glashüttenmuseum". It is located in the historic Fronfeste, not far from Purschenstein Castle. It houses unique evidence of the art of glassmaking that once existed in the Ore Mountains, dating back to the time of settlements around 1200 and justifying the term "glass country" for this region as early as the Middle Ages.

If you want a particularly beautiful panorama, stop at the Schwartenberg (789 m). Not only is the fantastic view worthwhile, but the landlord of the Schwartenbergbaude always has a joke for his guests! 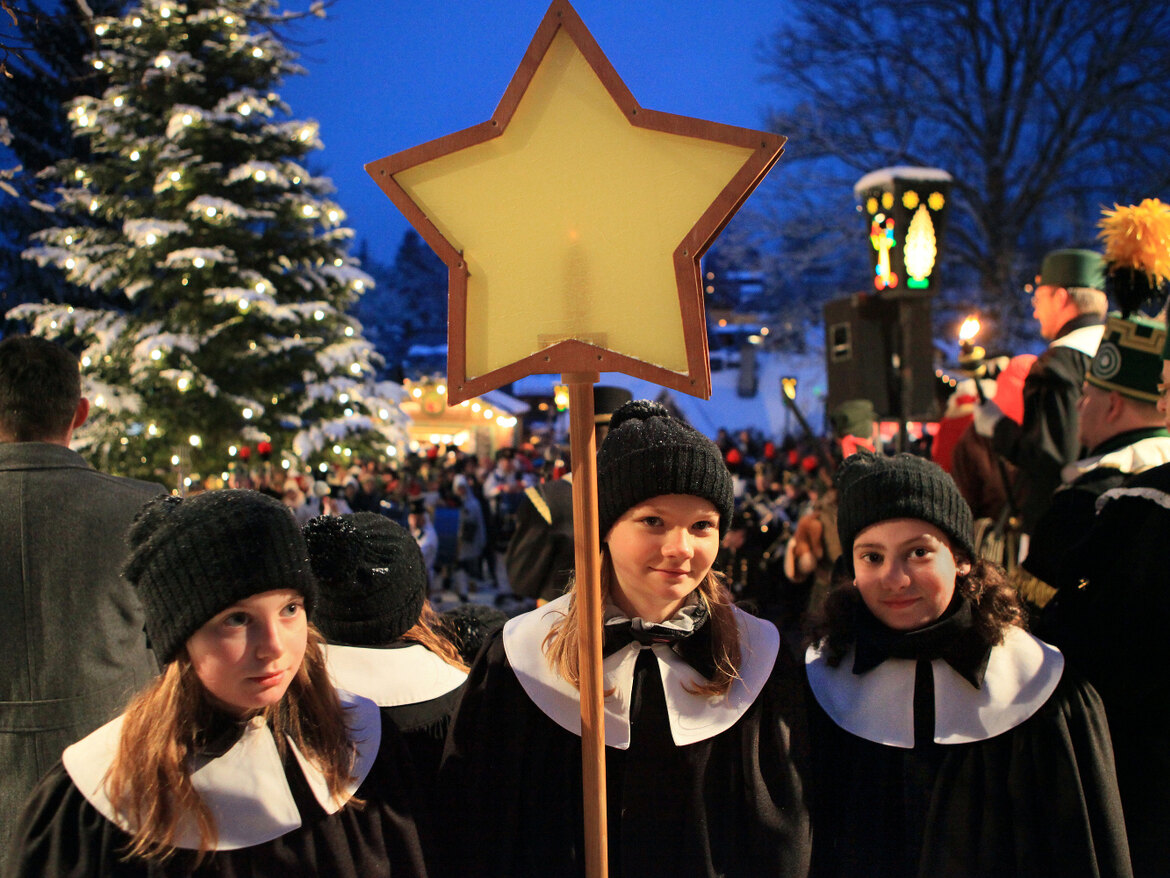 The small toy village of Seiffen is known far beyond its borders. You can see and experience the production of wood art from the Ore Mountains here. Look over the shoulders of the craftsmen as they chop chips and turn hoops... or try it out for yourself. Find your own Christmas decorations for the upcoming holidays, for example at the traditional house Wendt & Kühn or at Näumanns Holzkunst & Design.

In the toy village Seiffen you will also find a summer toboggan run, the famous church of lights, a toy museum or the model railroad exhibition.

Abenteuerbergwerk Fortunastollen - go on a treasure hunt and find the legendary Amber Room. Listen to the miner's story or join in and tap your own stone with hammer and mallet.

The 750-year-old town of Olbernhau is located in the middle of the Erzgebirge and forms the border between the eastern and western Erzgebirge.
The "Saigerhütte Olbernhau - Grünthal" is a unique contemporary testimony to non-ferrous metallurgy in the world dating back to 1537. 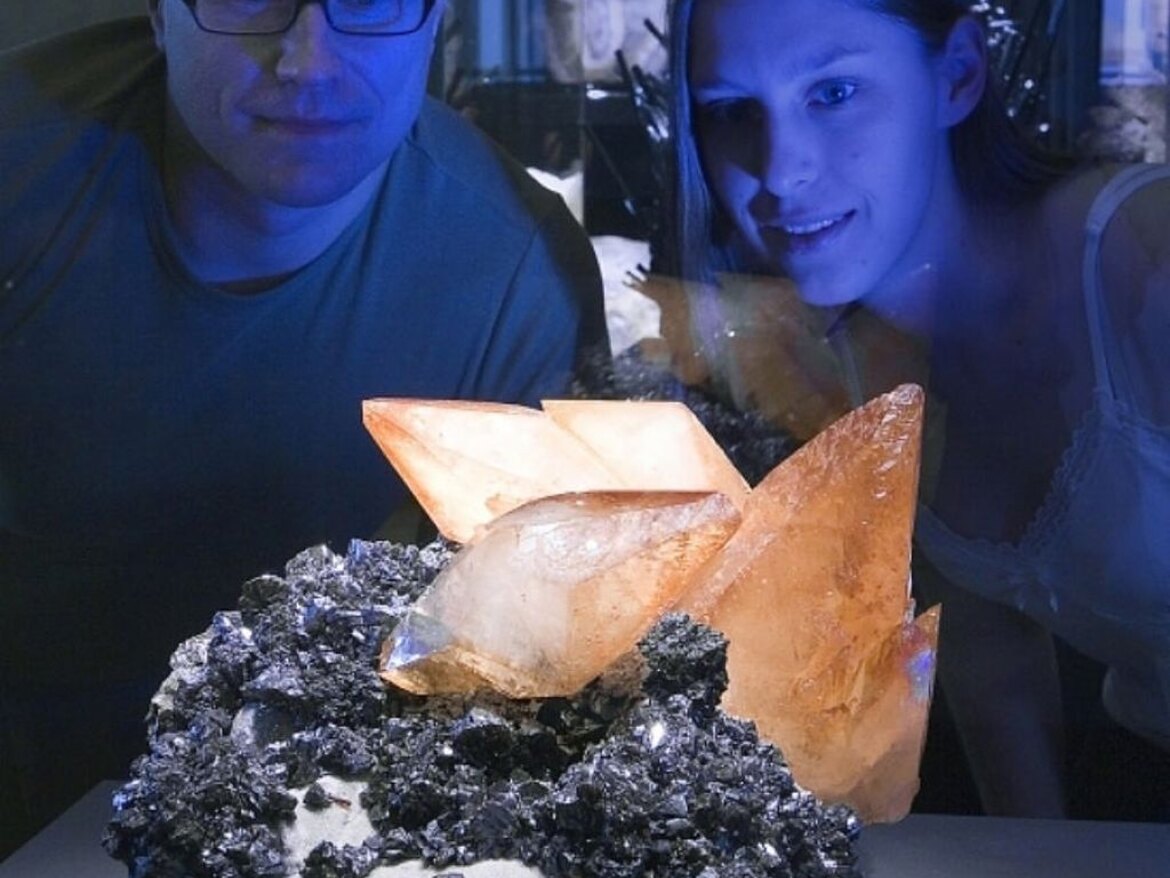 With Freudenstein Castle including the important mineral exhibition "terra mineralia". Also worth seeing is Freiberg Cathedral with a large number of objects of art historical value, including the tulip pulpit (1505), the miner's pulpit (1638), various epitaphs and two Silbermann organs (1711/1714). 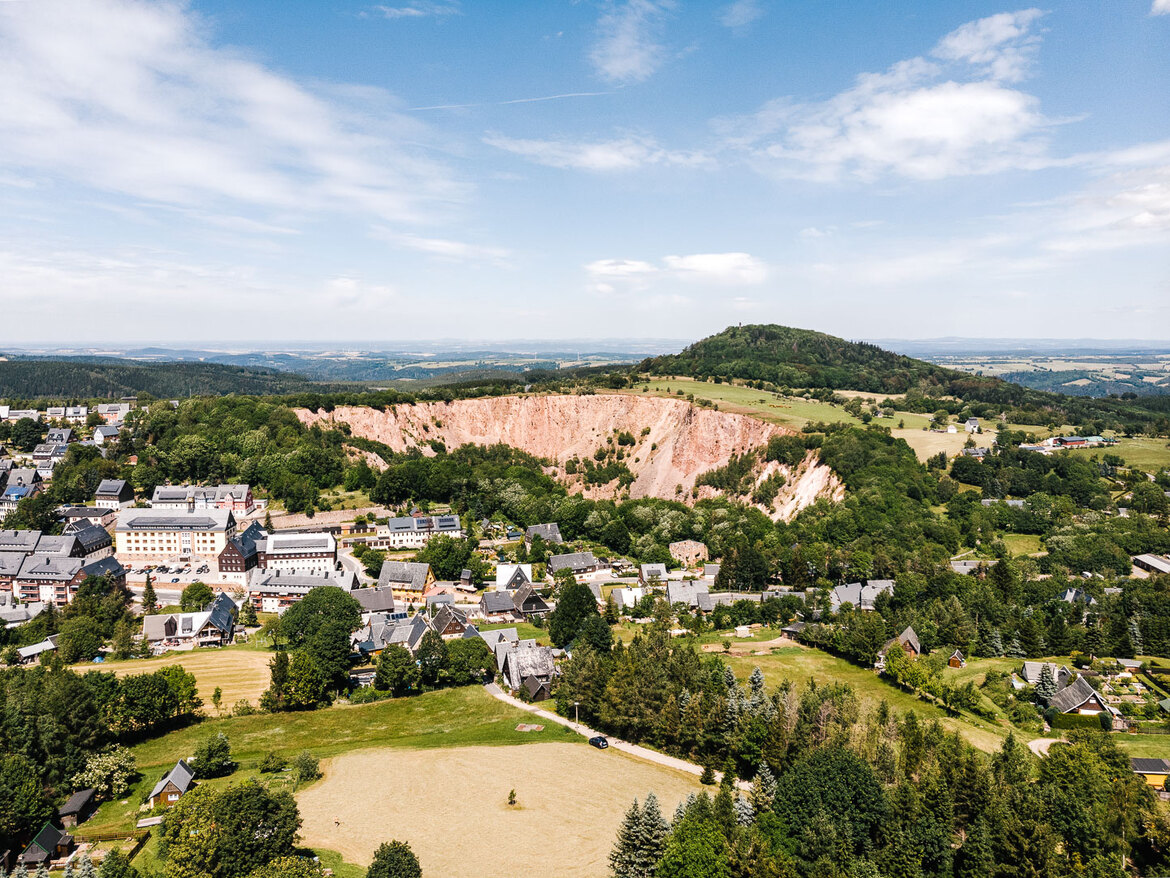 Discover the surroundings of Altenberg

The leisure facilities in the Holiday Region Altenberg are particularly versatile, whether you are young or old, small or large - here you are guaranteed to find what you are looking for!

Check out our tips 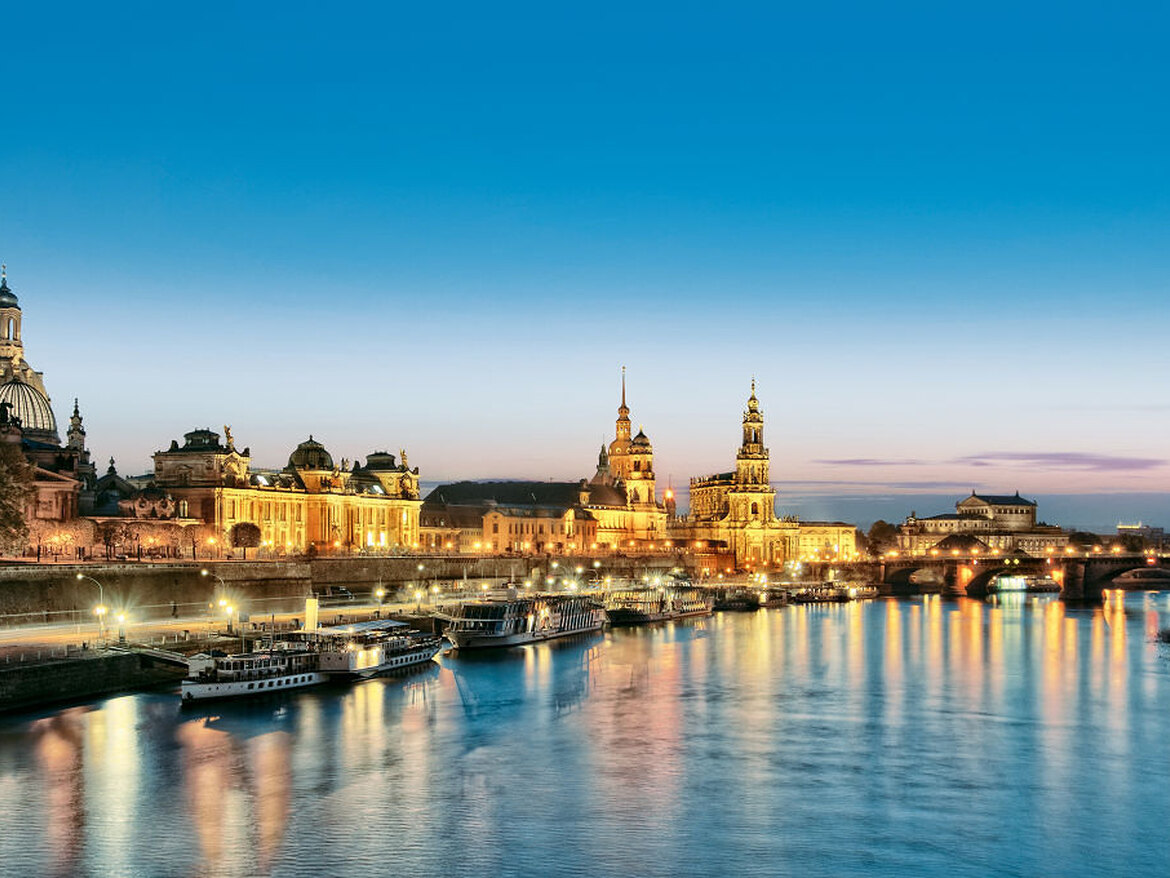 Dresden is internationally known as a cultural city with numerous important buildings, such as the Baroque Zwinger, excellent museums, such as the Gallery of Old Masters, and famous orchestras, such as the Saxon State Orchestra or the Kreuzchor. Much of Dresden's Old Town has been reconstructed and shaped by different architectural eras, in addition to the Zwinger, for example, with the Frauenkirche on Neumarkt, the Semper Opera House and the Hofkirche, as well as the Residenz Palace. The Striezelmarkt, founded in 1434, is one of the oldest and best-known Christmas markets in Germany. Dresden is also called Florence on the Elbe, originally mainly because of its art collections; its Baroque and Mediterranean-influenced architecture and its picturesque and climatically favorable location in the Elbe Valley have contributed significantly to this. 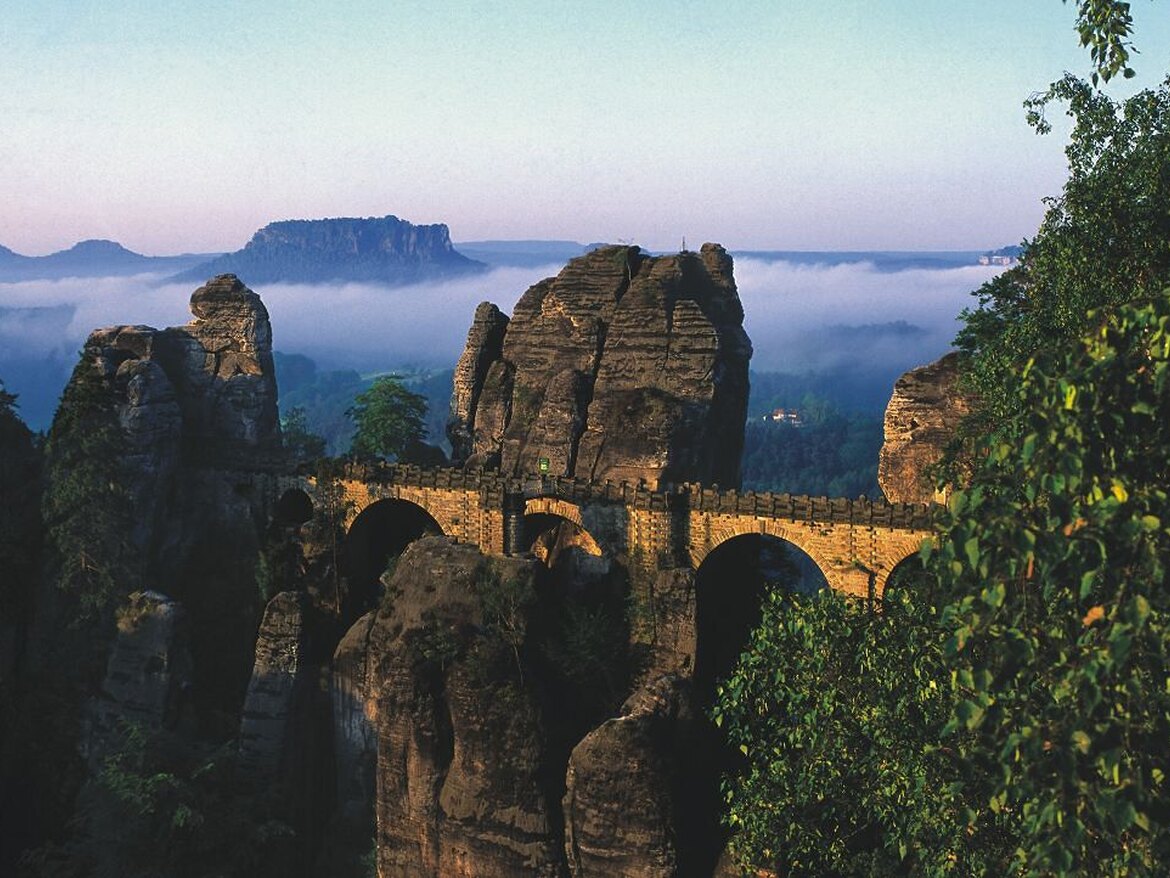 Sächsische Schweiz is the perfect destination for hiking in Saxony. Varied hiking trails with steps, ladders and short climbs lead through the fascinating rock formations of the Elbe Sandstone Mountains. In between, magnificent views await you each time. We are totally excited about hiking in Sächsische Schweiz.

Visit saechsische-schweiz.de for more information about the region. On this website you will find a number of beautiful walks in the area.

Just strolling through the historic center of the city is an experience: the many small, winding streets, churches and imposing Gothic and Baroque buildings give the city a charm all of its own. When the sun shines, the "Golden City" certainly shows its best side - according to legend, Prague got this name because of the sandstone towers that glisten gold in the sunlight.

One of the city's most famous attractions is Prague Castle, an imposing complex of churches and fortifications. As you explore the area around the castle, be sure to take a stroll through the beautiful gardens that surround it. 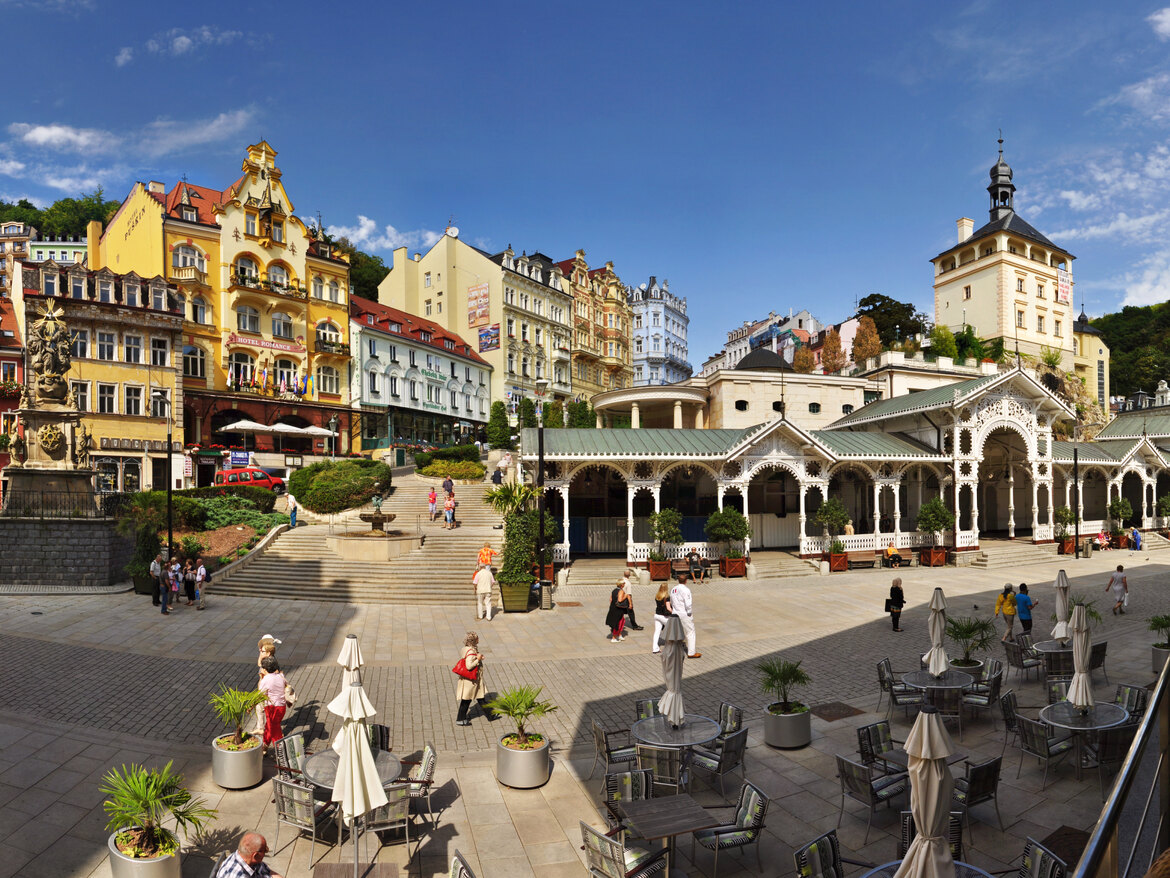 Karlsbad, Czech: Karlovy Vary, is a spa town in the western part of the Czech Republic with about 48,500 inhabitants. The town is located at the confluence of the rivers Teplá (Tepl) and Ohře. Karlovy Vary is one of the most famous and traditional spas in the world.

Since July 24, 2021, the town has been a UNESCO World Heritage Site of the most important spa towns in Europe. 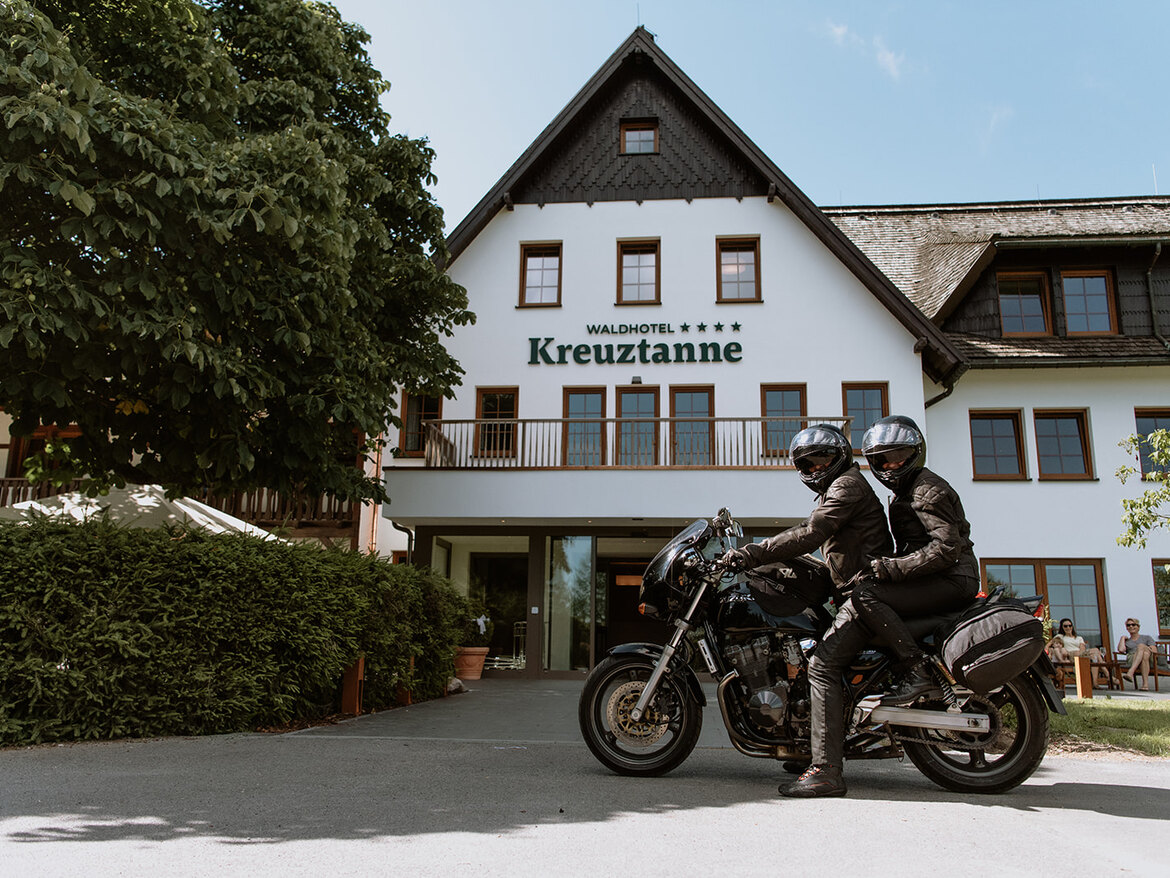 Motorcycling in the area

For years we have been awarded as "Motorcycle-friendly hotel in Saxony" by ADAC in Saxony and the DEHOGA Saxony e.V. 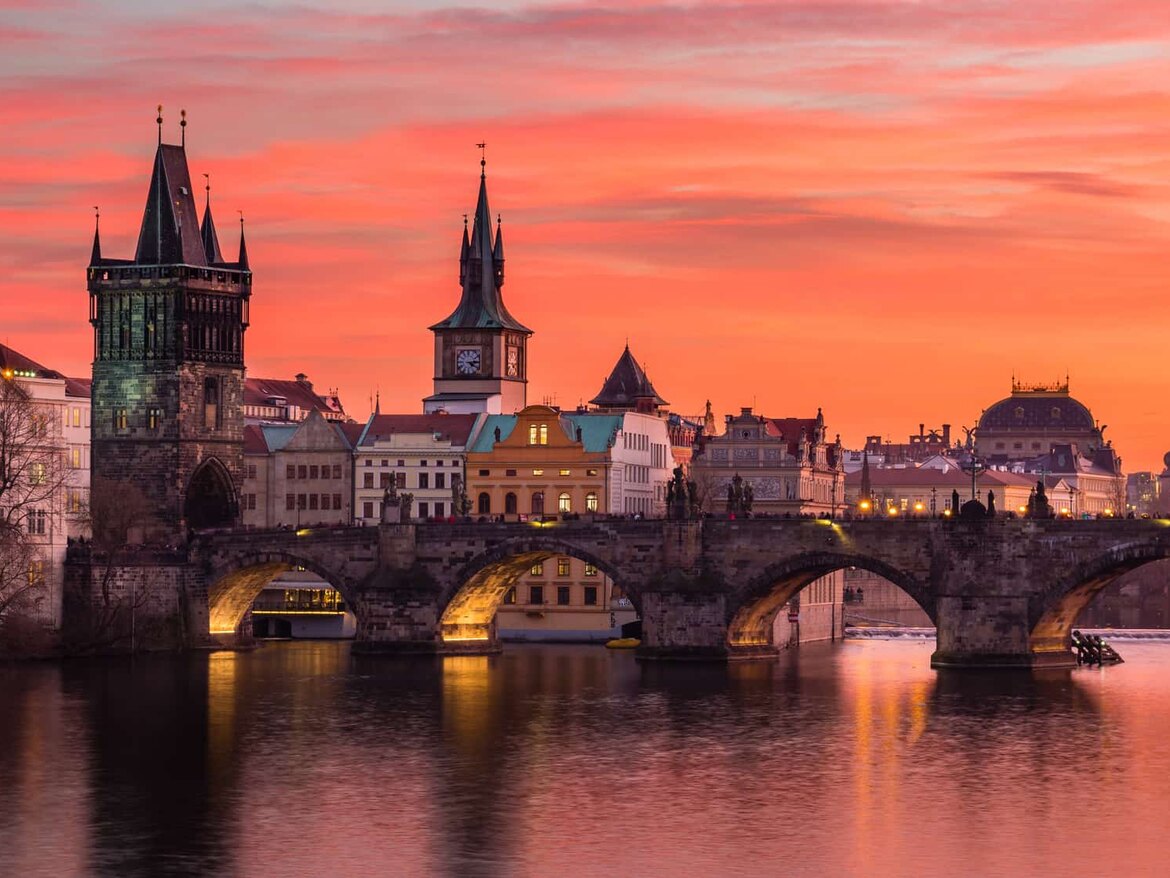 Organized trips around the Ore Mountains

Regional partners offer guided day trips and on-board service in a fully air-conditioned minibus directly from the hotel upon request and availability. You can find dates and times at our reception. 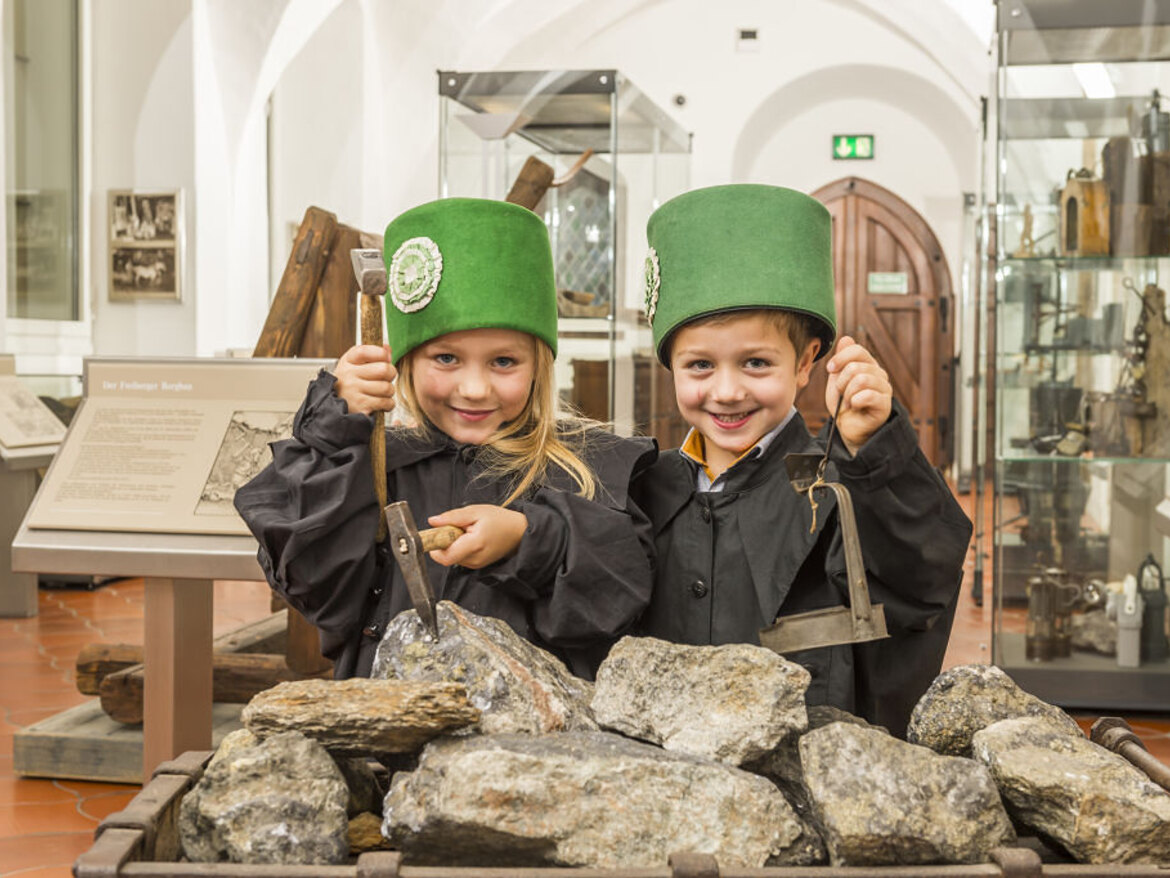 Our region is a UNESCO world heritage site

The Ore Mountains are dotted with unique mountain ranges and wildly romantic river valleys, as well as picturesque villages that have their origins in the region's 800-year mining history.

The region is best known for its tradition, resourcefulness and cordiality. The way of life of the people of the Ore Mountains is unique. Numerous old customs are still lived in a very authentic way and passed on from generation to generation. For example, mountain parades and Mettenschichten are still a regular part of the winter and Christmas seasons in the Ore Mountains.

Winter sports in the Erzgebirge

There are numerous winter sports possibilities in the immediate vicinity of the hotel. When snow conditions are good, we recommend a snowshoe hike directly from the hotel - right across the field with a beautiful view of the snowy ridge of the Ore Mountains!

In the ski areas of Holzhau, Bad Einsiedel and Hermsdorf you will find top level cross-country ski trails. You can reach these areas by car in about 15 minutes.